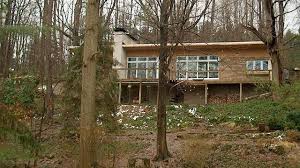 Convicted serial killer Jeffrey Dahmer’s childhood home is for sale in Bath, Ohio. The home is also the site of Dahmer’s first murder in 1978.

The three-bedroom, 2,170-square foot ranch-style home is located in a private wooded lot in northern Ohio and is listed for $329,000.

“You’ve got to kind of get past the horror factor,” says the home’s current owner, Chris Butler, who purchased the home in 2005.

Butler said he likes the home’s 1950s vintage style and the wooded lot.

Butler said when he first saw the house back in 2005 he didn’t understand why it had been lingering on the market without a buyer for six months and why the price was so low compared to other homes in the neighborhood. His real estate agent later told him the home’s history. While he says he was spooked initially by the home’s grisly past, he fell in love with the home and decided to buy it anyway.

Butler says he’s hoping other buyers can also look past the home’s history. He says that his real estate agent is vetting home buyers to make sure they are serious about purchasing the home and not just curious to see the inside.