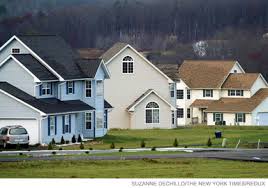 It’s been a rough five and a half years for the American homeowner. Since the housing bubble reached its peak in early 2007, Americans have watched helplessly as $7 trillion in housing wealth evaporated. At many points during this ugly plunge, pundits have erroneously called the “bottom” of the housing market – saying things could finally get no worse. And then they got worse.

The American public can therefore be forgiven for eyeing the latest round of predictions that the market has turned a corner with skepticism.  Of course, the housing market will heal at some point, so perhaps the boy is crying about an actual wolf this time.

The best reason to shed your hard-won dubiousness is a report issued today by the The Demand Institute, a think tank jointly operated by the well-respected and non-partisan research organizations The Conference Board and Nielsen. The fifty-page study is definitively labeling 2012 the year of the housing bottom. It says:  Read more