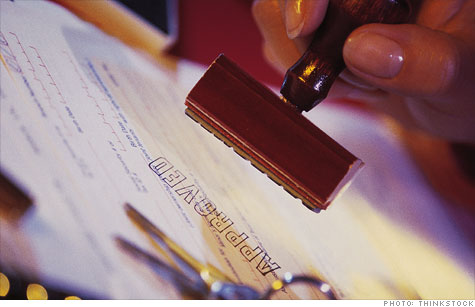 In January, the Consumer Financial Protection Bureau finalized new rules that would require lenders to verify borrowers’ ability to repay their loans. It capped loan terms and fees and the bureau said that qualified mortgages are borrowers whose debt does not exceed 43 percent of their income.

The requirements are to go into effect January 2014.

“Adoption of these new limitations by Fannie Mae and Freddie Mac is in keeping with [the] FHFA’s goal of gradually contracting their market footprint and protecting borrowers and taxpayers,” the FHFA, which regulates Fannie and Freddie, said in a statement.

The two mortgage giants, which do not issue loans, provide financing to banks and other lenders by purchasing mortgages that are often repackaged as securities that are sold to investors. Fannie and Freddie back about half of home loans today.

Following the 2007-2009 financial crisis, the Dodd-Frank law created the Consumer Financial Protection Bureau, which issued rules that would force lenders to make sure borrowers could pay back loans to avoid the steep losses that banks experienced before. “The law also called for a category of safer, lower-priced loans that lenders could make in exchange for some protection from lawsuits arising from ability-to-repay disputes,” Reuters reports.

The CFPB is creating a temporary qualified mortgage status, which the FHFA said Fannie Mae and Freddie Mac would be permitted to purchase loans that fit under that status to ease the transition.