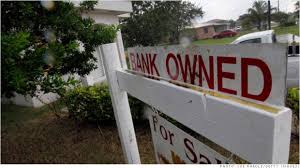 Sales of bank-owned properties last quarter hit their lowest level since early 2008, according to a new report.

There were 101,371 distressed sales during the first quarter of 2013, RealtyTrac said Thursday. That accounted for 21% of the total market, down from 25% a year earlier.