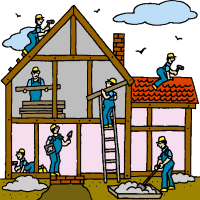 Construction spending on single-family homes, apartments, and remodeling projects increased in November, helping the economy finish 2011 strong and start 2012 with yet another sign that points to an economy finally in recovery mode, the Associated Press reports. The news joins other recent reports that show consumer confidence is up, manufacturing activity is pushing higher, and the unemployment rate is at a three-and-a-half-year low.

Construction projects in November increased 1.2 percent in November to a seasonally adjusted annual rate of $807.1 billion, the largest increase since August. Yet, the number is still about half the $1.5 trillion pace that economists consider healthy for the sector.

“While spending on single-family construction still remains extremely depressed, it has now increased for six straight months and looks consistent with other indicators signaling some improvement in the housing market,” Daniel Silver, an economist with JPMorgan Chase, told the Associated Press.